Are robot hotels the future of hospitality?

Home > Uncategorized > Are robot hotels the future of hospitality? 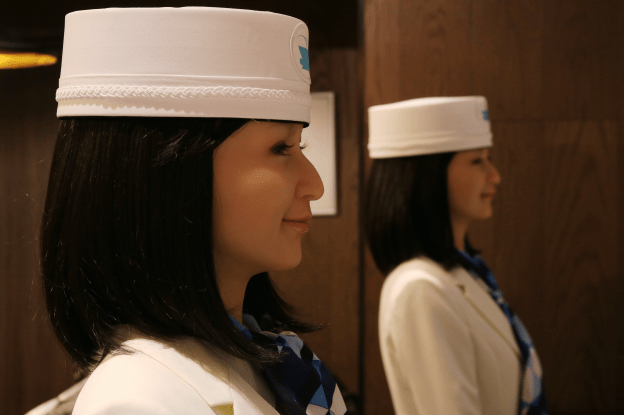 A smiling receptionist stands at the front desk…but not is all as it seems. At the Henn na Hotel in Tokyo, all the staff are robots.

The Japanese hotel chain entered the Guinness Book of World Records in 2015 as the first-ever hotel to be staffed entirely by robots. Currently, H.I.S. Hotel Holdings operates 12 such locations, including one close to a popular theme park where guests are greeted by animatronic velociraptors.

Although these robot hotels were initially conceived with the goal of keeping labour costs down, they’ve become an attraction in their own right. With many smart features and convenience options, we may begin to see hotels like Henn na cropping up around the UK. But, do we still prefer the human touch?

Not all of the Henn na Hotels are as gimmicky as the one near the theme park. In fact, most are designed for business visitors. Miura Tatsuki, executive in charge of the public relations at the business management planning division, observed that sometimes business travellers want a completely no-frills, no-fuss experience.

“It takes a surprising amount of energy to talk to people, even hotel staff,” said Miura, in an interview with a Japanese travel guide. “We figure this is going to be just that much harder for a businessman to take after wearing himself out in negotiations or other business meetings…Now, at Henn na Hotel, you can go your whole stay, from check-in to check-out, without ever talking to another person.”

It isn’t just automated check-in and check-out that’s included. The rooms have many futuristic features for business travellers, including voice-controlled lights and air conditioning, and an LG Styler, a high-tech clothes steaming appliance. These smart features also allow the hotel to gather valuable customer data, enabling them to run the hotel more sustainably and efficiently.

Or will robot hotels be the new customer service pet hate?

That said, these robot hotels don’t have the highest rating in H.I.C.’s portfolio. Miura also noted in the same interview that the Henn na Hotels are rated at three to three-and-a-half stars, which is not as high as might be hoped. So what could be at the root of customers’ reticence, despite all the futuristic features?

It’s possible that robot hotels are in danger of getting the same reputation as the call centre automated message. We’ve all been there – going round and round in circles with a voice-controlled automated message when we’re desperate to talk to a human. Even now, with the dawn of supposedly more efficient chatbots and other automated customer service solutions, 55% of people still prefer to talk to a human on the phone.

It seems that if the hospitality industry is to leverage the advantages of robot hotels, they need to do it in the right measures. Certainly, speedy self-check-in and voice-controlled AC are a nice touch, but there need to be humans on hand to deal with the finer points of customer service.