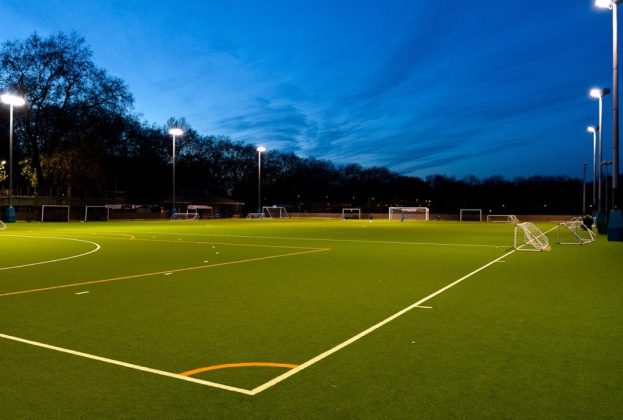 Battersea Park All Weather Sports Ground comprises two astroturf pitches and changing rooms. The sports ground is an invaluable leisure facility for adults and young people in Wandsworth, where they can play football and hockey without the puddles and mud that usually come with playing team sports during England’s inclement winters.

Although astroturf mitigates the discomfort caused by wet pitches, it is still important that the changing rooms are warm and comfortable with plenty of hot running water. This is why in 2008, the local council commissioned DHJC to upgrade the facility’s ageing central gas-fired boiler system.

DJHC designed and installed a new condensing boiler system. We opted for a condensing boiler over other a traditional model for four key reasons: environmental impact, safety, and its cost and space efficiency. Firstly, their environmental impact: consensing boilers have larger heat exchangers, which more efficiently recycle waste gases back into the system. Generally, this represents a saving of approximately 1.7 of CO2 every year, which would otherwise escape into the atmosphere.

Subsequently, this makes condensing boilers very efficient. Through recycling waste gases, a condensing boiler is roughly 90% energy efficient, which is substantially more efficient than a traditional boiler. In turn, these gains on efficiency are translated into savings on energy costs.

Finally, in a confined space like a changing room, condensing boilers don’t take up too much space. Condensing boilers have no need for a hot water tank, making them far more compact. Equally, they are fully sealed, which ensures nothing is drawn into the boiler’s interior via the flue. This means the unit is not only compact but also far safer than traditional boilers.

The outcome was an efficient, effective, and safe boiler system that ensured the changing rooms were always warm with a constant supply of hot water. This meant local residents could continue to enjoy this excellent facility while the local authority saved on running costs.