How can we preserve “water cooler moments” when face-to-face isn’t possible?

Home > News/Blogs > How can we preserve “water cooler moments” when face-to-face isn’t possible? 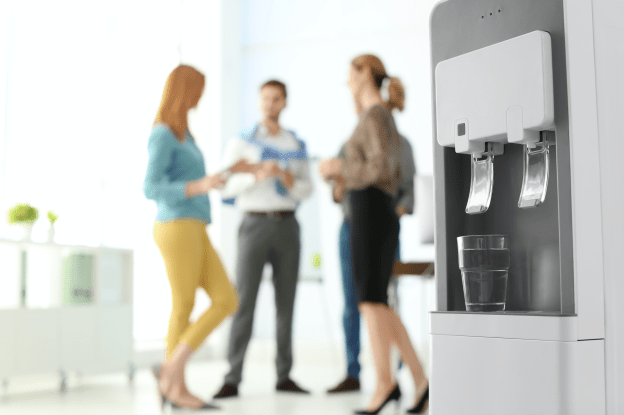 Most restrictions have now been lifted in the UK but many companies are still choosing to hold onto flexible or working from home options.  There are a variety of reasons why. Some businesses have found that it’s more efficient for them to run without the need for property to pay rent or rising energy bills. Across the country there is still an air of uncertainty with regards to virus transmission and many employees have now become so used to working from home that the thought of going back into the office can cause health problems.

That being said, some of the world’s biggest businesses, including banks stated that they want their employees back in the office back in February. Goldman Sachs, for example announced that they want to put an end to all remote work, while JPMorgan has also expressed their desire to get people back at their desks.

But over the past two years, hybrid or remote working has become a more common business model so what can we do to preserve these “watercooler moments” when face-to-face isn’t possible?

Is productivity really all that counts?

Although these chance encounters were certainly lost during the pandemic, remote working hasn’t caused a fall in productivity. Despite the anxieties of many bosses in the first round of lockdowns, many saw a rise in productivity. This is now well-reported; according to statistics published by Stanford University of 16,000 workers over 9 months found that working from home actually increased productivity by 13%.

But work isn’t just about productivity. Ultimately, we’re social animals and it can affect our performance and overall happiness in the long term. A study of UK workers by Indeed reported that 73% of employees miss socialising in person and 46% of respondents specifically said they missed the work-related side conversations that happen in the office. These unofficial encounters are fertile ground for ideas and knowledge sharing, so we need to think about how they can be maintained.

Going beyond the Zoom happy hour

Much like lockdown productivity stats, advice pieces about how to maintain a social workplace online are now all too common. However, many of us are now a little jaded by the suggestion of a Zoom happy hour – which often just ends in an awkward live stream of people sipping from beer bottles.

Thankfully, more well-thought-through ideas are starting to emerge. One school of thought is that these unstructured moments are, in fact, about structure. Chance encounters happen in the office when you’re getting set up, making an afternoon snack, or debriefing after a meeting. Therefore, being aware of everyone’s schedules is important to make time for each other.

The next step is actually nurturing relationships. Group calls can be clunky; there’s lag, people talking over each other, “you’re on mute” and so forth. Scheduling time to do one-on-one calls creates more meaningful, easier interactions. You can schedule these while doing the more menial tasks that are an inevitable part of the working day, like doing the washing up. If you struggle with conversation topics, activities like online gaming or a virtual book club are good ice breakers.

Despite the protests of some business leaders, it seems that remote working will be here to stay, at least for some businesses, whether compelled by the pandemic or not. It’s important to be creative and nurture these chance encounters to preserve the dynamism of workplaces and boost morale – or else we may see those productivity stats slip.